I feel pondering hard Questions leads to more knowledge than just seeking answers. Here I'll try to strike a balance between then Questions I've had and the potentially correct Solutions to match.

*ROUGH DRAFT* (Taking hints from all the great speakers and just getting something written!)
Getting to be part of NA Write the Docs conference was a really fun experience.  It was exhausting and a little stressful from time to time but things rolled smoothly and overall seemed to be a great success!

Volunteering role: my main task was to wrangle speakers by making sure they're checked in, and knew where they were needed to be.  The Crystal Ballroom's musically charged Green Room was the quiet prep room for speakers.  An email was sent to the speakers of its availability.  However, not all of them saw email/found the room, so finding and checking them in became the most difficult task.  Once the speaker was found by any of the conference organizers things calmed down since we knew they were at least there.  However I had some frantic searches comparing names with their fuzzy head shots to track people down.  In some cases there were no head shots and none of the organizers knew what the speaker looked like(uncommon worst case).

First day was the craziest as with doing anything for the first time.  Often desperately walking through the crowd attempting to identify speakers.


I apologize to all the attendees who were weirded out by my awkward glances at their name badge.

Once a speaker was found, the general procedure was to..
All of the speakers were incredibly kind and most fairly happy to find the quiet of the Green Room to collect their thoughts.  It wasn't completely necessary to coral the speakers but knowing they were ready and knowing that they knew when they needed to be on stage was comforting to all the organizers.  It also ensured that speaker transitions went fairly smooth.

Potential improvements, biggest would be easily tracking down the speakers and getting them checked in.  A few ideas Ruth and I bounced back and fourth a little bit while the conference was winding down:
Write the Docs was the first formal tech conference I've been involved with and I'm glad I volunteered.  I have helped out with some PIGSquad Game-Jams in the past but those were less organizationally challenging and smaller scale.

One of the biggest surprises for me was how polite and generally excited all the conference attendees were!  Everyone smiled while passing in the hallway and the atmosphere was exceptionally warm and inviting.  At all the tech events I've been to in the past there are generally a few difficult individuals and zones of silence which develop where no one is interested in talking.  Not the case at WtD!  It almost seemed that if there were magical universal time allowances for everyone, the conference and discussion would have gone on for days longer!

Eric, Troy, and Ruth definitely have found a group of people who are the unicorn merging of technical writers and developer who care about documenting the intellectual achievements of our Information Age and haven't had a place to congregate before.  That might partly explain the enthusiasm of the attendees.  All of the organizers deserve serious props for creating such an inviting atmosphere and great content! 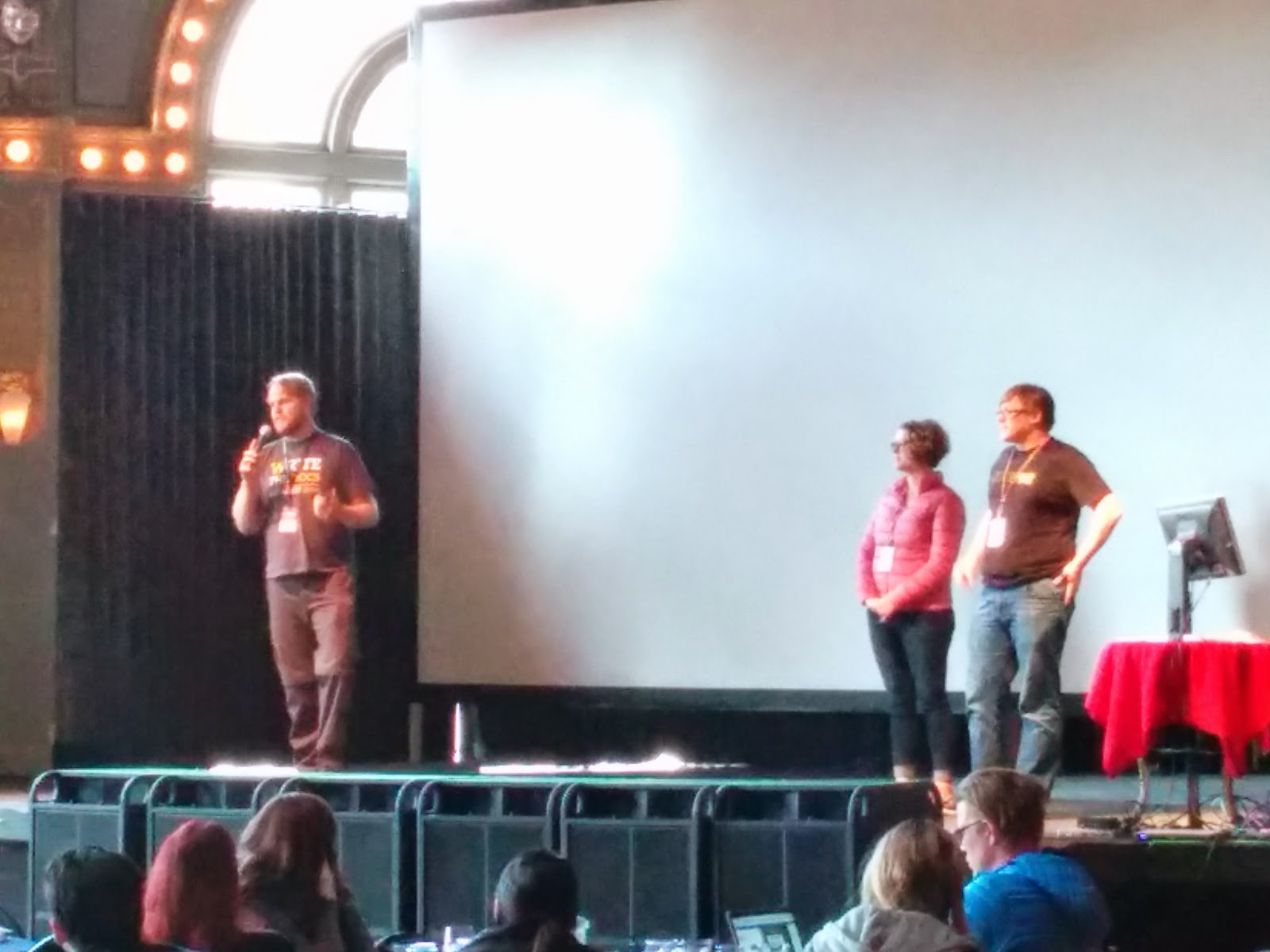 To be quite honest I wasn't insanely passionate about documentation before the conference.  My main opinion previously was from my former job which was: it really sucks when there's no good docs on systems.  On my last day I stayed up till 4AM to document the projects I was leaving behind, I didn't want to leave a vacuum of knowledge like I had already experienced.  Post-conf, seeing all of the great talks definitely has strengthened my appreciation for documentation.  Wherever I end up working next, I hope we write the docs in an efficient and appreciative fashion! 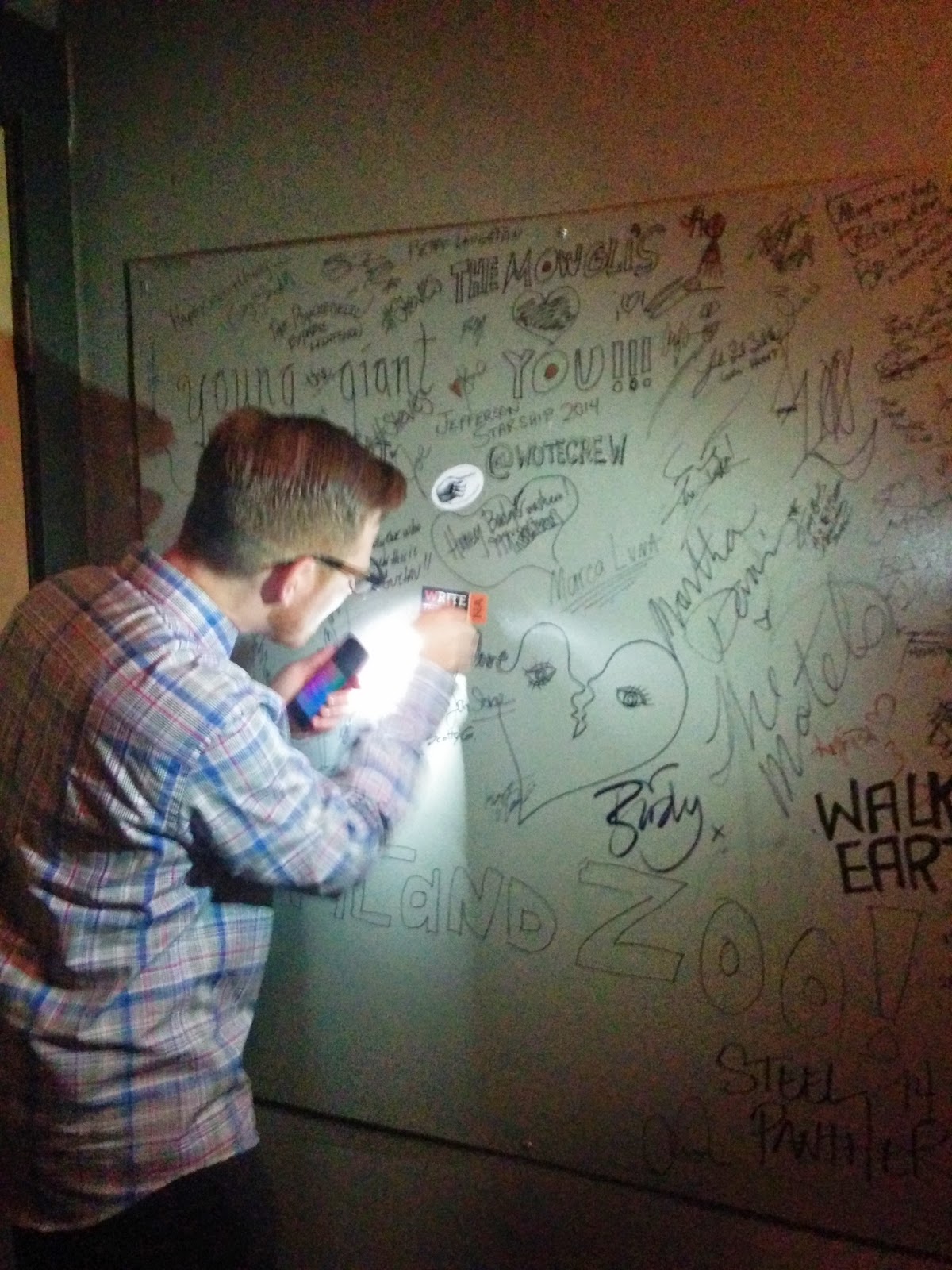 Nik ensuring Write The Docs legacy remains on the Crystal legends board! 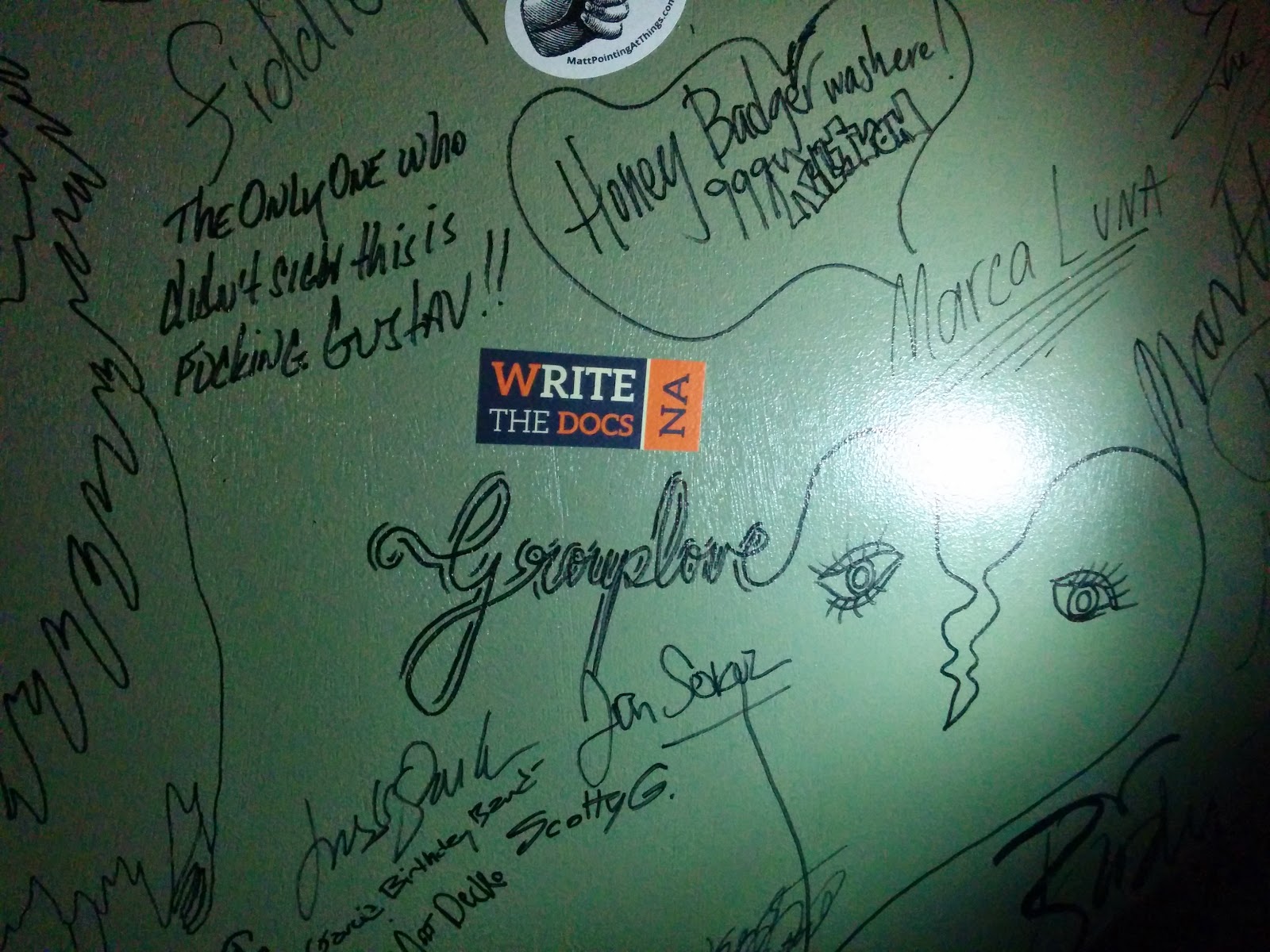 Hopefully when my brain has recovered I'll add more to this post as great moments trickle through my mind...
Posted by hihi at 11:41 PM No comments: